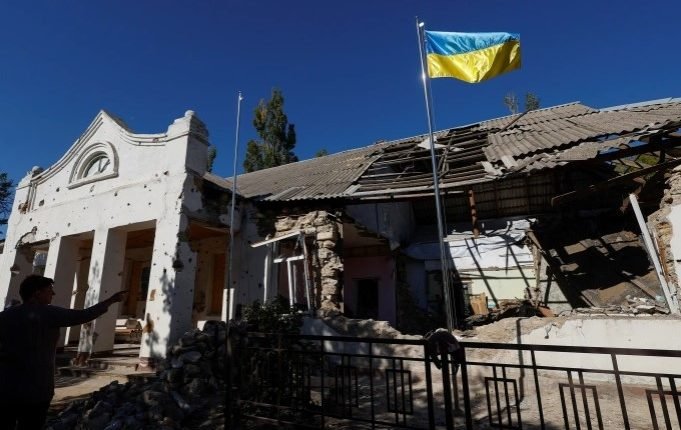 The main prerequisite for Kyiv’s negotiations with Russia to end the war is the return of all occupied Ukrainian land, according to a senior security official.

Following the Russian invasion in late February, Kyiv has repeatedly called on its Western backers to provide more weapons.

“The main condition of the Ukrainian president is to restore Ukraine’s territorial integrity,” Danilov tweeted.

“Assurance – modern air defenses, aircraft, tanks, and long-range missiles. Strategy – positive steps. Russian missiles must be destroyed before they can be launched in the air, land, and sea,” he said.

Danilov’s comments came after Ukrainian President Volodymyr Zelensky said in an overnight speech on Monday that he was open to “real” negotiations with Russia to restore Ukraine’s borders.

He also called for reparations after Russia’s devastating attack and punishment for those suspected of war crimes.

Discussions of a negotiated end to the conflict have intensified in recent days after The Washington Post reported that the United States had privately encouraged Ukrainian officials to express their willingness to talk to their neighbors.

According to reports, U.S. officials want Ukraine to take the moral high ground and be more interested in the talks, out of fear that Kyiv could soon lose international support if it remains staunchly opposed to discussions.

After Russia announced the annexation of four partially occupied parts of Ukraine in late September, Zelensky said there would be no talks between Kyiv and Moscow as long as President Vladimir Putin remained in power.

Government sources have reiterated that position in recent days, saying Kyiv is open to negotiations with Putin’s successor.

On Monday, Kremlin spokesman Dmitry Peskov said Moscow was open to talks, but Kyiv refused. Russian officials have repeatedly said they will not negotiate the territory they claim to have annexed from Ukraine.

No country is other than Russia’s ally North Korea has acknowledged the recent annexation. Most countries in the world also refuse to recognize Crimea, annexed in 2014, as Russian land.

While most candidates in both parties strongly support Kyiv, some right-wing Republican candidates have expressed doubts about the cost of U.S. military aid, while others on the left have faced backlash after calling for “vigorous” diplomacy to end the war.

The White House said U.S. support for Ukraine would be “unwavering” regardless of Tuesday’s vote.

The Ukrainian government said it had invoked wartime laws to control stakes in several “strategically important” companies to ensure its military had enough supplies to defend against a Russian invasion.

Defense Minister Oleksii Reznikov on Monday announced the expropriation of a leading engine maker and four other energy and manufacturing companies from some of the country’s wealthiest people.

He did not detail the size of the acquired stake but said the assets of the five companies would be managed by his department to meet “urgent” military needs.

None of the five companies were immediately available for comment.

During the meeting, Shmyhal said that the state-controlled companies made products or provided services “essential” to Ukraine’s defense and energy needs. These businesses must operate 24 hours a day, 7 days a week, to meet national defense needs,” he said.

The news comes as Russia has launched a spate of airstrikes on Ukrainian cities in recent weeks, damaging about 40 percent of Ukraine’s energy infrastructure.

This is the first time the government has used martial law to take such action since Russia invaded Ukraine in February. It was also the most dramatic wartime intervention in big business, affecting companies linked to the tycoon, whose political power has long been sought by Ukrainian President Volodymyr Zelensky’s team.

Danilov told a news conference in the capital, Kyiv, that the companies included Motor Sich, an aircraft engine maker working in the Russian-partly controlled Zaporizhzhia region.

After martial law is lifted, these assets may be returned to their owners, or their value may be compensated,” Danilov added.

The decision was made at a meeting of senior security officials chaired by Zelensky on Saturday and went into effect on Sunday.

The companies are partly state-owned and have ties to powerful businessmen, including billionaires Ihor Kolomoisky and ​​Kostiantyn Zhevaho, as well as businessman Vyacheslav Bohuslayev, who was arrested in October on suspicion of collaborating with Russia.

“This is not nationalization,” Reznikov said. “It’s a direct wartime takeover of assets. These are completely different legal forms.”