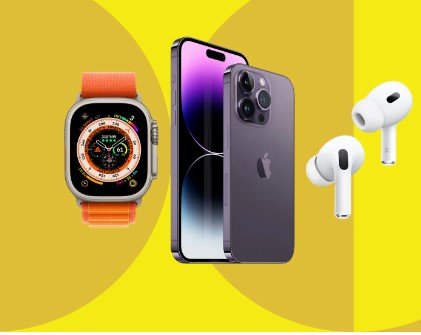 IT’S SEPTEMBER, AND you know what that means: iPhone season. Today, Apple held an event at its Cupertino, California, headquarters, where it unveiled annual updates to its mobile devices. There are four new iPhones 14, a more durable Apple Watch for adventure enthusiasts, and a new pair of AirPods Pro.

Did you like the idea of an iPhone Mini? Well, too bad. Apple has nixed its smallest phone in favor of a new iPhone 14 Plus, which sits a rung above the just announced iPhone 14 but below the top-tier iPhone 14 Pro and iPhone 14 Pro Max. Like its Pro Max sibling, the 14 Plus has a 6.7-inch screen. The standard-size iPhone 14 and iPhone 14 Pro have 6.1-inch displays.

Outside of this, most of the changes with this year’s iPhone lineup are coming to the Pro models. The infamous notch, for example, which housed the sensor components necessary for Face ID, has now slimmed down to a pill-shaped cutout in the same area, not unlike most modern Android phones. It’s called the “Dynamic Island” and Apple’s making it interactive. If you’re on a call, for example, this area will passively show you call controls if you press and hold it. It’s a smart way to reclaim the space. There’s also always-on display support, so you won’t have to tap your phone screen or pick it up to see notifications or the time of day.

The Pro models are also the only handsets to use the brand-new A16 Bionic processor. It’s the first time the standard non-Pro iPhones are sticking with a prior year’s chipset, but this is likely due to supply chain constraints and aimed at keeping costs low. The A15 Bionic in the iPhone 14 is still a super speedy chip, but you won’t get the very best performance.

The primary camera on the Pros will finally move away from 12 megapixels and will utilize a 48-megapixel sensor (a common trait among most Android phones). More megapixels doesn’t necessarily mean better photos, but it will let you capture more detail, and you can print your photos at larger sizes without losing sharpness. Apple says it’s using a new Photonic Engine for its image processing on all the new iPhones that deliver improved low-light performance across the board for all the cameras, and a new Action video stabilized mode lets you capture smoother footage than ever before (at a lower resolution).

All of the new iPhones support features like Car Crash Detection, and will get two years of included support for Apple’s new Emergency SOS via Satellite feature, which lets you point your iPhone at a satellite to contact emergency services in the event of a dire situation in an area with no cellular service.

Get Deeper Insights Into Your App Performance with HeadSpin